Can't believe it's been over a year since my last Eurovision Memories post.  We left the story at 1984 - the contest I couldn't remember - so let's move on to the following year, before I fast-forward to my 2016 posts!

By the time 1985 came round, I had fallen back in love with Eurovision again, because Sweden was going to host it.  After the shambles of 1984, SVT took up the challenge of producing a contest to remember.  Most of that was down to its charismatic presenter.  Long before Petra Mede was wisecracking her way to ESC notoriety, we had Lill Lindfors, who kicked off the show with the maximum cheese overload of "My joy is building bricks of music".  What an impression she made on the TV audience later that night with her (very deliberate) skirt rip/'wardrobe malfunction'.  It was pretty daring in those days though! 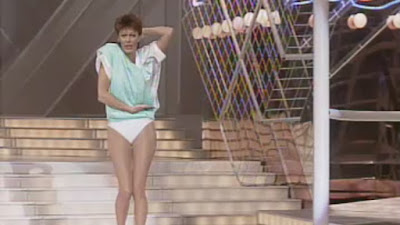 Gothenburg's Scandinavium was the venue for the 1985 contest.  Unusually, Terry Wogan was commentating from London rather than Gbg as he was unwell at the time, but was still in good form back in those days.

I wasn't too thrilled by the stage set at the time - random climbing frames and mesh - which was obviously going for a Nordic minimalist look.  It still doesn't thrill me, and reminds me of a variation on the Melodifestivalen 1984 set.  But what about the songs and singers?

Well, we were still slap-bang in the middle of the 80s so there was lots of big hair, big frocks, big shoulder pads and big orchestral arrangements.  For the younger fans of the 21st century contest, they may be surprised to see the postcards showcasing the songwriters, rather than the singers, in various locations in Gothenburg.  But that's no surprise really - back in those days it really was just a "song contest", the focus was more on the songwriters and the winner's trophy always went to the songwriters rather than the singers.

When looking back now at ESC 1985, there are very few songs from that contest which I would listen to today.  So in retrospect I guess it wasn't really that different from the preceding year, the ESC "annus horribilis" of 1984, but at least you could always rely on SVT to put on a better show.  80s Eurovision was certainly a different world.  In 1985 I was listening to mainly indie/alternative music which was very different from anything in ESC, but I always had room for all kinds of music. 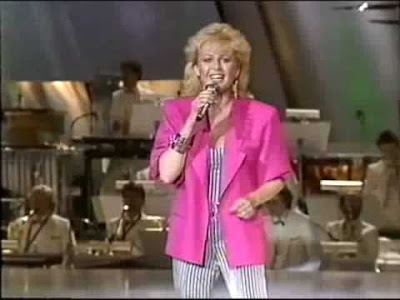 Back then I didn't know what "schlager" was, but my favourite song from 1985 had a definite schlagery tone.  As with many winning songs, I often prefer the host country's song from the following year to the previous year's winning song.  (I'll cover this in more detail in a future Eurovision Memories post). So it was in 1985.  After watching the annual preview show on BBC1, "Bra Vibrationer" - which is not a song about vibrating bras, as Lill explained! - became my pre-contest favourite.  Kikki Danielsson gave a confident performance of the song, although it was sadly accompanied by two irritating backing dancers who were probably a prototype for Carola's equally irritating dancers in 1991 and in various other incarnations of Melodifestivalen.  It was interesting of course to see Kikki competing in 1985 against her former Chips colleague Elisabeth Andreassen; the two singers would later reunite in Melodifestivalen 2002 along with Sweden's ESC 1987 representative Lotta Engberg as Kikki, Bettan & Lotta. 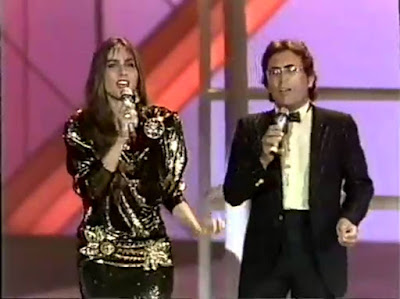 My other favourite song was the Italian entry, "Magic Oh Magic" which saw the return of Romina Power and Al Bano to the contest after 9 years.  Romina looked better than she sounded. although Al being Al, he made sure that he would be heard above everyone else anyway.

By 1985, the UK was still achieving top 10 placings at ESC, although back in those days 6th and 7th were looked upon as a bit of a failure.  How times change!  Imagine if the UK got a 6th or 7th place now - it would feel as if we'd won it.

As usual, the Song for Europe line-up featured a number of unknown singers as well as 70s hitmaker Alvin Stardust with "The Clock On The Wall" which let's just say was very influenced by "Green Door" which was a no.1 hit for Shakin' Stevens.  After the numerous manufactured groups put together to represent the UK, it was a big change to send a solo singer again for the first time since 1974. 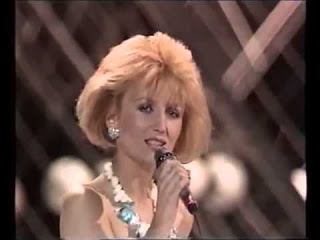 Vikki Watson looked like she'd walked straight off the set of Dynasty.  But she was, and probably still is, a rarity for the UK at Eurovision, as she co-wrote her own song "Love Is...".  She also performed it very well and achieved an excellent result of 4th place, ahead of more fancied entries from Israel, Italy, Spain and Denmark.  However, like many of the other songs in the 1985 contest, it was very old-fashioned and out of touch with contemporary pop music, and didn't make the top 40.  Listening back now to "Love Is....", well yes it's old-fashioned, but it is actually better than I remembered.  It's one of the UK's most underrated entries from that time.

But no-one was to match the exuberance of Bobbysocks!  A duo so exuberant that their name ends in an exclamation mark!  (But I still don't know to this day why Hanne was wearing a parachute for a skirt).  Anyway they performed the hell out of "La Det Swinge" with bags of charm, charisma and above all - fun!  A quality sadly missing from most of today's ESC entries (yeah, yeah, I know, I'm old and all that, but just sayin'). 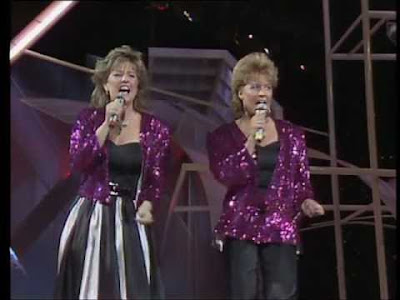 Even now, their sheer joy at winning is a joy to watch.  Who would ever have believed that the country renowned for "nul points" or low placings on the scoreboard in the 70s and early 80s would actually go on to win Eurovision?

Hanne and Bettan continue to be a vision in purple lurex; they stole the show at the Eurovision's Greatest Hits last year and regularly pop up in Melodi Grand Prix to provide a nostalgic interlude.