Is this the future of how we watch live music? Um....no. 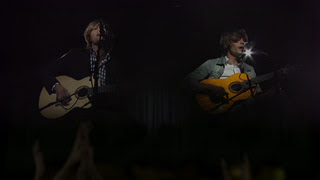 Tonight was the first of the long-awaited series of Aftonbladet's "Live-Löpet" concerts - a new, revolutionary, interactive way to view live music on the internet.

A good idea, but did it work? Sorry, but on first viewing I'd have to say....no.

I thought tonight's opening set by Mando Diao would be a full band show, not an acoustic set by only two of the band: acoustic sets aren't really my thing, to be honest.

And then there was the challenge of "watching" the show - the setting was far too dark, even with my computer on its brightest screen setting - you could hardly see Björn and Gustaf singing and playing. For me, this was the biggest problem and it needs to be sorted out in time for all the other concerts.

Despite the 'interactive' options - including taking pictures (check out my very own concert photo above!) - the whole thing lacked atmosphere. To be honest, I'd have preferred it if an ordinary live concert had been broadcast, with the full band, and a live audience.

Finally, I was expecting the concert to last a little longer than 15-20 minutes!

I wasn't there but was going to next ones, that's really pity you didn't get what you (and I) expected. Seems like we can hardly expect now something bigger :(

Oh well Damian, at least we now know to expect a very short acoustic set from everyone...the main thing I'm hoping for is that they sort the lighting and make it brighter for us all to see! :)