Melodifestivalen 2013: all song titles and artists are now known

Last Monday, the line-ups were revealed for the first two heats of Melodifestivalen 2012.  However I decided to wait until the remaining artists and song titles were revealed today before I published my thoughts and expectations.  Of course, song titles are not much to go on, so this is all just guesswork by me!

As usual, the line-up is a mix of established and unknown artists, with some very well-known Melodifestivalen songwriters.  Ah yes, those songwriters.  That's still my biggest complaint about the contest: the same old songwriters year in, year out.  Oh well....let's just hope we get some good songs out of it.

But I'm not getting my hopes up too high: the modern day Melodifestivalen isn't just a song contest any more - it's a great big 21st century entertainment event, which sadly these days is as much about the attention-grabbing novelty entries/publicity stunts, which will get maximum press attention, as it is about actual songs.  But on the other hand, I always look forward to the annual six-week extravaganza.  Hard to believe it, but it's only a few weeks away!

So here's what we have to look forward to in February 2013!

It's "Groundhog Day" once again, as Mr Kempe has one more try at MF success. I'm guessing 'anthemic country ballad'?

An unknown quantity to me, but sometimes the unknown names provide the most pleasant surprises. Remember a certain Loreen from a couple of years ago? Although this may get lost amongst the more well-known names.

Now here's a fascinating entry. I'm excited by that songwriting team, based on their past efforts, and the singer will certainly get people talking...

Another new name to me and an unknown quantity.

Anna is among that group of credible female singer-songwriters of recent years in Sweden, but I can't really see this being such an interesting entry.

He was the big breakout star this year, so I'll guess, even without hearing the song, that he'll be direkt-till-Globen and I'm expecting an uptempo entry.

I was really happy to see Eric amongst the line-up, and with a Swedish-language song too! He was very popular a few years ago but I don't know if he'll appeal to the MF voters though.

With Feiner's pedigree as an established dance act - and of course one of the people responsible for the Melodifestivalen end credits theme - he has a very good chance here. I'm expecting a very modern, current, electronic dance anthem.

Mr Cans is of course the lead singer of heavy metallers Hammerfall, but became more famous in recent years for competing in Körslaget. That's what I love about Swedish rockers - and I always like rock acts in Melodifestivalen so I'm looking forward to this.

Kempe time again - does the man never give up? Based on looks alone, Anton will probably be 2013's answer to Eric Saade.

Digga digga digga ding ding ding, he's back again. Where would Melodifestivalen be without a nonsense song? However you could also argue that this is keeping a more worthy entry out of the line-up. Oh well, that's the modern contest for you I guess :(

Is he 2013's answer to Thorsten Flinck? I'm not so keen on the songwriter either. I'm guessing it may be something boring.

Back on familiar ground with some very familiar names, which would suggest that it could be one of the favourites not just in this heat, but in the full contest. A very intriguing Swedish-Norwegian collaboration. Hopefully something uptempo and not a boring ballad.

She's a new name to me, but the songwriters certainly aren't. I'm guessing a mid-paced ballad?

With that line-up of singers and songwriters, the schlager-fanatics will be in heaven - you could even say they will be 'on top of the world'! Expect something big and uptempo with lots of strutting, glitter, and the obligatory key change of course.  I wonder if they will be known as PHJ?  Pity Lena Philipsson didn't join the line-up, then it would be PHPHJ.  (Oh shut up Laura, that's just silly!)

One of the most bizarre MF song-titles of recent years, from an artist who was very popular in the 80s and 90s. The other songwriters were responsible for various Azerbaijan ESC entries, so it'll probably be rather predictable. 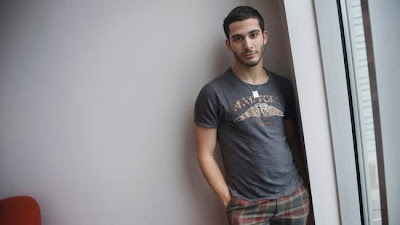 Regardless of what the song's like, I have no doubt that this will be my favourite three minutes of Melodifestivalen 2013. Need I say more?

Eddie is not the only ex-Swedish Idol contestant in this year's contest - Amanda was of course the final winner of Swedish Idol so I'm sure she'll get a lot of votes anyway.

With a title like that, the return of Tommy Körberg, and a certain Mr Dorsin in the songwriting line-up, you just know that this will be one of the year's most talked-about entries. Yet another song which is probably taking the place of a better song, but one, like Mirakel this year, that guarantees lots and lots of press.

A totally new name to me, I'm expecting some rock/pop here?

A new opportunity for Janet to resurrect her pop career here, and with those songwriters I'm expecting a big modern uptempo dance-pop number.

And now, one of the serious contenders this year. Based on previous form this is likely to be an absolute qualifier. I'm no fan of her work though, and I doubt if this song will change my mind. 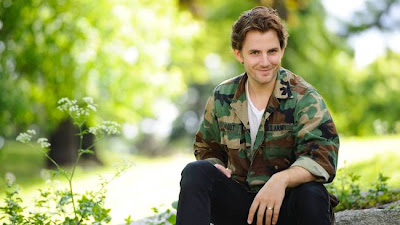 In And Out Of Love - Martin Rolinski (Thomas G:son, Andreas Rickstrand)

I'm delighted to see Martin in the line-up as a solo artist and I'm hoping that the song is up to the standard of his previous Melodifestivalen entries with BWO. I'm not so sure if he'll qualify though, but it will be very nice to see him again!

One of this year's pre-qualifiers which have taken over from the webbjoker which I don't think has been such a successful experiment, so I can't really see this progressing further.

Another frontman from a famous Swedish rock band striking out on his own: this time it's the lead singer of Mustasch. Will his fanbase be watching Melodifestivalen though? Very interesting song title!

Like Elin Petersson in heat 3, this was one of the pre-qualifying entries which we knew about before the final line-up was revealed. Again, not a likely qualifier.

Another new name here, so I don't really have anything to say about it, but it could be an intriguing entry with a very exotic feel to it.

Here we go...yet another new name, there are a lot of them this year! Peter Kvint is an MF regular though, so I'm expecting an uptempo pop-rock number. 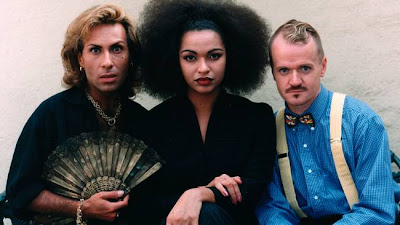 Ladies and gentlemen, it's the return of one of Sweden's most flamboyant pop combos ever! Melodifestivalen just got a million times more interesting. Let's hope that the song is as amazing as their reunion.

A very welcome return by young Ulrik who gave us one of my favourite songs in this year's contest, "Soldiers". Hopefully this will be as good as that one.

Mr G:son has been very busy again this year hasn't he! Sylvia - yes, she of "Y Viva Espana" fame - is currently starring in series 3 of Så mycket bättre so this will keep her in the spotlight for a little bit longer yet. Expect some good old fashioned schlager.

Another artist I'm very happy to see in the line-up, I'm sure that Idol finalist Robin will give it his all, he has such a great voice andwhether he qualifies or not, I'm hoping that this will certainly give his career a massive boost.

All will be revealed in February!

(Pictures courtesy of SVT/Scanpix)
Posted by Laura (EuropeCrazy) at 22:00 No comments:

Why the world continues to go crazy for Gangnam Style 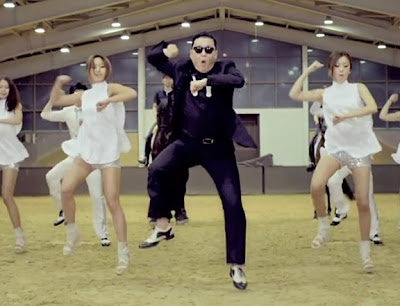 You may have heard the song. You may even have seen the video and the dance routine...OK I'm joking, it's the song which won't go away. Some love it, some hate it with a passion but one thing's for sure, you can't ignore it. The last couple of months have seen the world go crazy for Korean pop star Psy and his infectious Gangnam Style. It used to be the "holiday songs" which dominated international charts for months on end, but now all you need to be is an internet sensation.

So why has Gangnam Style achieved such cross-continental international appeal? One word: fun. There are only two kinds of music making the charts and getting airplay at the moment - either electronic dance music and all its variations, or The New Boring. Both of which are completely joyless. It took me a while to realise the reasons why modern pop music just isn't doing it for me: the fun has gone out of pop music. Bland conveyor-belt artists and talent show contestants are all singing about partying and having fun, but I can't hear any happiness.

Gangnam Style, on the other hand, is silly, frivolous and just plain daft, but it's an invitation to dance and have fun in these otherwise dark times and Psy is clearly enjoying every moment. Like all these crazes, there's no doubt that its time will pass and he will be remembered as a one-hit wonder: but we'll fondly remember Gangnam Style for putting a brief, fleeting smile back on the face of modern pop.
Posted by Laura (EuropeCrazy) at 20:24 No comments:

Eurovision 2013 latest: Belgian artist chosen and rumours of a "big name" for the UK?

Every week brings Eurovision 2013 that little bit closer...now we have the announcement that Roberto Bellarosa, the winner of Wallonia's version of The Voice, will be RTBF's representative for Belgium in next year's ESC.

Meanwhile news reaches us that Paddy O'Connell announced on Twitter today that the BBC has signed a "big name" to represent us next year.  *Closing my eyes and wishing really hard for the Pet Shop Boys, please please please...ok just let me dream for a few seconds eh!!*
EDIT 17.11.12: Will Young?  Mika?  Either one of them will do.  Or Paloma Faith.  Anyone but Pixie Lott!

After the daily rumours in Sweden, next year's Melodifestivalen songs, artists and songwriters will finally, officially, be unveiled at press conferences on 19th and 26th November.  According to Aftonbladet, the full line-up is almost known.  http://www.aftonbladet.se/nojesbladet/melodifestivalen/article15733744.ab

Now off to one of my favourite ESC countries.....Iceland!  have progressed to the semi final stage of Söngvakeppni Sjónvarpsins.  They've chosen their final 12 songs and the final will now take place on 2nd February, thankfully brought forward from a Super Saturday scheduling nightmare on 9th February, which potentially clashed with the Norwegian and Finnish finals and heat 2 of Melodifestivalen!
To be continued.....
Posted by Laura (EuropeCrazy) at 23:50 No comments:

Yes, the gossip and revelations just keep on coming, folks :)

It shouldn't be too long now until we find out just how true the above information is!
Posted by Laura (EuropeCrazy) at 20:22 2 comments:

As a follow-up to my post from the other week, I'm happy to say that I have found enough songs to make up my annual chart, however I've been doing some more thinking about it and have decided to postpone the chart till the end of the year to allow more songs to be released, listened to and loved!

I'm usually on holiday from work before Christmas, but there's a change this year and I'll be off between Christmas and New Year instead, so I'll be posting the chart during that week.

Posted by Laura (EuropeCrazy) at 09:47 No comments: