So the waiting is finally over.  This morning the host - or should that be hostess - of the 2013 Eurovision Song Contest was revealed.  Drum roll....it's Petra Mede!

Who's Petra Mede?  If you're a Melodifestivalen fan then she will be a very familiar face, as she hosted the contest in 2009.  She's a 42 year old Swedish comedienne who has appeared on a number of TV shows and hosted her own comedy chat show.

IMHO,  I'm a bit disappointed as I was hoping for Sarah Dawn Finer and Måns Zelmerlöw to present the contest, however I'm willing to give Petra a chance.  It will also be interesting to go back to the days of just one presenter.  There's a whole generation of people out there who always associate Eurovision with 2 or 3 presenters, but believe it or not, there once was a time when one presenter was enough.  It wouldn't be the first time that Sweden tried a more 'offbeat' presenter, so could we expect a crazier 21st century version of Lill Lindfors?  She has a tendency to be 'outrageous' so I just wonder what the viewers of Europe and beyond will make of her offbeat, bonkers style?  Will her own individual presentation style translate beyond Swedish borders? We'll have to wait till May for the answer. 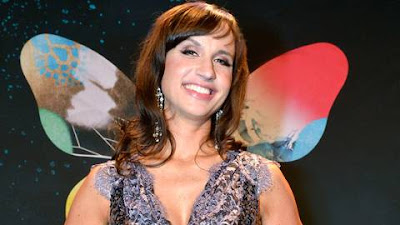 Posted by Laura (EuropeCrazy) at 20:47 No comments:

I have been trying to cut down on my internet time over the last couple of weeks as I've had lots to do around the house....but it's impossible to resist the lure of Eurovision national finals season, and MGP is one of my favourite national finals. So.....

Norway's Melodi Grand Prix process for 2013 seemed shrouded in secrecy, with week 1's songs and artists only being revealed a few days beforehand.  There's also been a change in the presenters this year: out goes Per Sundnes and his various female sidekicks, in comes Erik Solbakken (who seems to have got better looking since he co-hosted ESC in 2010) and Jenny Skavlan.

Bizarrely, my usually reliable internet connection chose Saturday night to go a bit erratic, just when I wanted to watch the first heat of MGP live online, and I didn't get to join the show until later.

As I tweeted on Saturday night, national finals season is the same every year: anticipation, followed by disappointment, followed by further disappointment.  But we love it.  Because good or bad, national finals season gives us the kind of diversity which we just can't find in the all-too-generic music scene at the moment.  Even in what was, I think you will agree, a below-par heat of the usually high-standard MGP, you can't deny that it was certainly diverse: rockabilly, Euphoria-clones, gentle acoustic pop, death metal and electro-disco to name some musical styles. 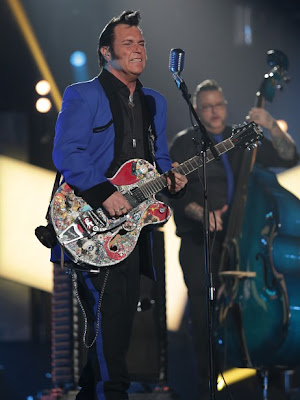 First out in Steinkjer this week was Vidar Busk with his rockabilly-tune "Paid My Way".  Now, seasoned Eurovision fans should be well-aware of the 'underestimate rock n' roll songs at your peril' rule in national finals, particularly in the Nordic region (although it can also be a non-Nordic thing: the-hell-that-was-Copycat) yet despite this I didn't see it qualifying to Oslo Spektrum.  WRONG!!!!  I will never learn. 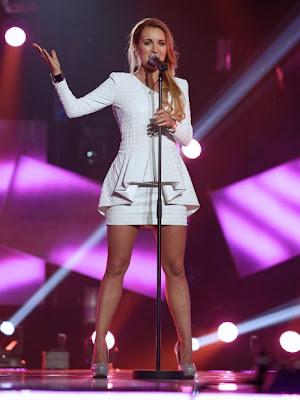 Next up was "Sleepwalking" sung by Carina Dahl.  This was the first of the week's entries co-written by Ben Adams, no less, which caused brief excitement, however the result was a kind of generic Taylor Swift-style contemporary girlie-pop and nothing really special.  I only caught this in the recap and listened to the song later on, however it never really changed my mind. 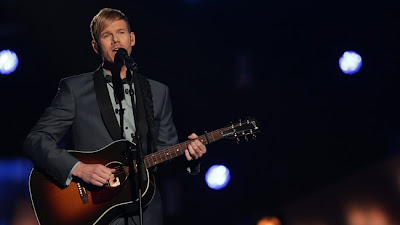 A break from all the frenzied dance routines next: "Det Er Du" sung by Tom Hugo.  Which was rather nice.  I'm not really into this acoustic style but this nice sweet song was actually very welcome here and I would have been very happy if it had qualified.  But it didn't :( 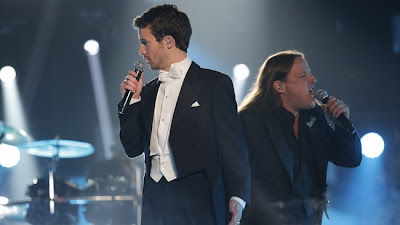 Then there are "songs" which you just completely shake your head at , but allow them a spot in the running order whilst giving thanks for diversity.  Oh look, it's Didrik Tangent-Thingy's brother Emil Solli-Tangen!  Teaming up with a death-metal combo named Gromth with a "tune" called "Alone".  Now I've always been partial to a bit of the old metal but this is taking it too far, then the less-handsome Tangent-Thingy brother goes and does his little 'I'm a proper singer, me' bit before the scary death-metal screamers take over again. 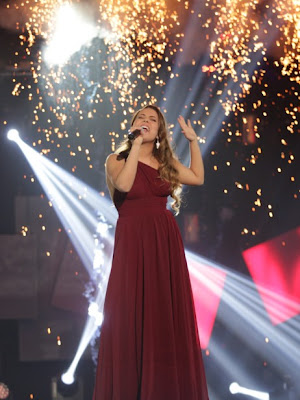 My internet connection recovered in time to catch Julie Bergan sing yet another Ben Adams co-write, "Give A Little Something Back" the title of which called to mind "Give A Little Love Back To The World" from that horrific era of ESC.  This was burdened with hellish staging, with people dancing and faffing about around a park bench and distracting from Ms Bergan's vocal efforts.  Unremarkable. 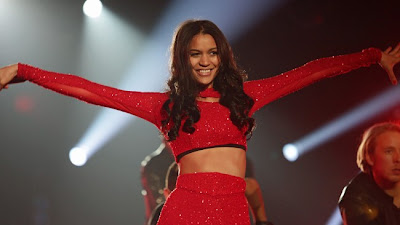 There is an established Eurovision trend where a song wins and then a fair amount of songs try to copy it the following year.  So the "Euphoria" tribute prize on Saturday evening went to Mimi Blix, she of "Allergic" fame.  The very generic EDM of "Catch Me" sounded like the Swedish House Mafia featuring Loreen.... 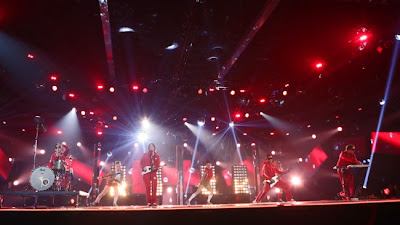 And so we arrive at the final song, which immediately grabbed me on first hearing.  After just one hearing, "The Underground" by Datarock became my absolute favourite of national finals season so far - OK there's not much to compare with at this stage, but hey ho - it's got a brilliant introduction and even if it borrows the title from Girls Aloud, and the tracksuits are a bit naff, you succumb to the irresistible electro-disco rhythms.  This is the first song to book a place in my 2013-50 year-end chart as we speak.  What I really like about national finals season is that it will introduce us to acts which we were previously unaware of.  So I checked out more of their music on iTunes.  They sound like a Norwegian version of Chromeo.  And yes, long-term fans of this blog will know that's a good thing.

So, after a little interval segment and some very long X Factor-style pauses, the three qualifiers were revealed in reverse order: 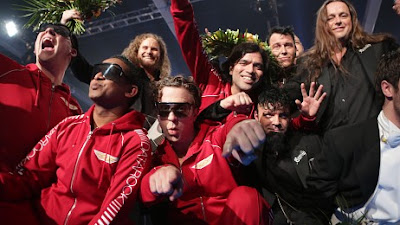 Above: this week's qualifiers celebrate in Steinkjer.
(All of the above pictures courtesy of www.nrk.no)

I wonder what next week's heat will bring?  Hopefully it will be better than this week.

If you're up for a bit of nostalgia, NRK's website still has all the old MGP heats and finals from the past few years...check out http://www.nrk.no/nett-tv/prosjekt/218
Posted by Laura (EuropeCrazy) at 10:59 No comments: 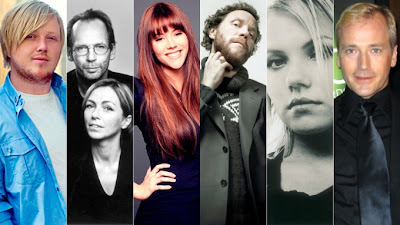 The third series of the Swedish TV phenomenon "Så mycket bättre" recently came to an end and it looks as if there is much more life in that celeb-reality TV format.  Whilst checking out what's hot in the Norwegian music scene on iTunes tonight I discovered that the format had crossed over there: it's called "Hver gang vi møtes" and we're now on season 2.

Old-school Eurovision fans may be interested to see that Anita Skorgan is taking part, whilst more recent stars in the line-up include Lene Marlin who had some international success at the end of the 90s, Marion Ravn formerly of M2M and the original "World Idol" himself, Kurt Nilsen.

If you want to find out more about the show go to http://www.tv2.no/underholdning/hvergangvimotes.  Just as in Sweden, they all decamp to a farmhouse in the country and sing each other's songs every week, which are then immediately released on iTunes etc.  Oh, and as in Sweden, there's lots of tears.
Posted by Laura (EuropeCrazy) at 23:59 No comments:

Today, SVT announced the running order for the four heats of Melodifestivalen which is only 4 weeks away! 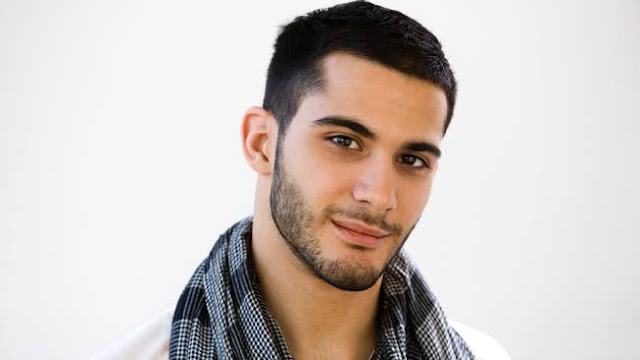 Posted by Laura (EuropeCrazy) at 21:04 No comments: