For the uninitiated, Belgium's broadcasters in Flanders and Wallonia take turns, year-about, to choose the country's Eurovision entry.  This year it was the turn of the Flemish broadcaster VRT to choose Belgium's song for Stockholm.

In recent years of course, it's the Wallonian broadcaster which has chosen Belgium's better entries. RTBF gave us "Love Kills" and "Rhythm Inside".  VRT gave us..."Mother".  I rest my case.


This year's Eurosong national final process was spread over three weeks, with the first week introducing the five relatively unknown artists doing cover versions of Eurovision songs; the second week had the finalists performing their songs without the distraction of staging, costumes, choreography etc - and the third Sunday (17.01.16) brought the final where the artists were able to give it their full stage presentation.

Unfortunately Eurosong had a bit of a low-budget feel, coming from a TV studio rather than a large Melodifestivalen-style arena but Éen were thinking big and taking a couple of Melfest elements: 1) having Christer Bjorkman as a guest expert (!) in the final, and 2) using international juries and adding their votes to the televote.  But there the similarity ended I'm afraid :(

Due to other commitments I'd missed the first week, with the ESC cover versions, but tuned into the second week and was distinctly underwhelmed by the songs.  I didn't hate any of them, but they were all just too mediocre for me.  The real highlight of week 2 was guest expert Beverly Jo Scott who brought some refreshing honesty to the proceedings.  And as for her fellow 'expert' - well there was some very surreal conversation going on that week and suffice to say if that had happened over here the censors would have pulled the plug!

Of course you can always expect lots of old ESC nostalgia clips during national finals shows, but VRT also decided to combine two anniversaries: commemorating 25 years since Clouseau represented Belgium in 1991 in Rome with "Geef Het Op", probably my most favourite song of that year and the introduction to my Clouseau-fandom which reached its height in the mid-90s.  Of course time moves on and Koen Wauters is no longer the dreamy teen idol from 1991, but Clouseau still remain very popular in Belgium.   The other anniversary was that of Sandra Kim winning 30 years ago in 1986 with "J'aime la vie".  So what did we get?  Clouseau doing a "John Lewis ad" version of that song.  Now you know that one of my pet hates is when cover versions of songs are slowed right down to acoustic or piano versions of an uptempo song, so I wasn't too keen on this.

By the time the final rolled round on Sunday 17th January, the five songs were ready to go with full stage presentation. 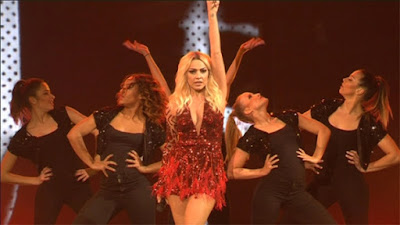 But firstly, an energetic, if not always tuneful, medley by Hadise who has gone on to have a successful career in Turkey in the years following "Dum Tek Tek". Readers of this blog with long memories will know that I was initially very scathing about that song, which was known as "Dum Tack Tack" at EuropeCrazy HQ.  But then the impossible happened: the song grew on me during a period of a couple of years when we holidayed in Turkey and I became rather obsessed with Turkish music.  But I digress.  Hadise was the other 'expert' on the panel in the final along with Christer Bjorkman. 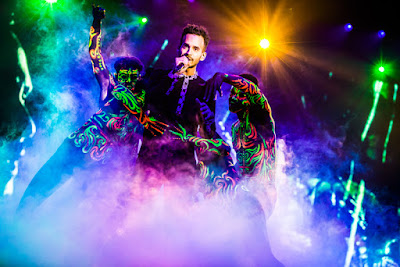 Adil Araab: "In Our Nature".

In week 2 he started off the song lying on the floor, Loic Nottet-style,  The song started promisingly, but unfortunately the chorus just wasn't strong enough as the verses  Perhaps a stronger chorus would have made it a more serious contender.  By the time of the final, there were some minor adjustments made to both the song and presentation, and Adil was upright and accompanied by dancers in eyecatching, colourful neon catsuits.  I rather liked this, just a shame that it fell short of being the really impressive song it promised to be. 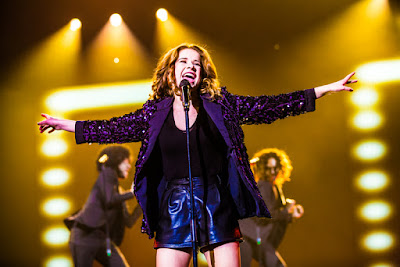 From what I've read, Laura would appear to be the most famous - or at least familiar - of the five finalists: after appearing on a TV soap she went on to The Voice van Vlaanderen.

This song is co-written by Sanne Putseys, better known as Selah Sue, who's had a lot of success in her native Belgium as well as in France and the Netherlands in recent years.

Laura was dressed in a glitter/leather combination and backed by some funky backing singers. Unfortunately this is the type of song which requires a stronger and funkier voice than what Laura has; her voice is just too lightweight for this song.  And my main issue with "What's The Pressure"...well check out the final paragraph of this blog post for the answer. 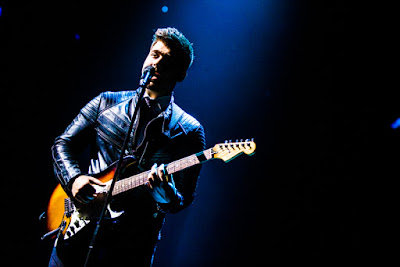 In week 1 Tom performed a rocked-up version of "Rhythm Inside".  A lot of the fans weren't too happy with that but I rather enjoyed it!  So I had a lot of hope riding on "I'm Not Lost".

Unfortunately, as with Adil's song, this fell short of its full potential.  The studio version is very impressive and the anthemic chorus comes over well.  However, in the live version, Tom just wasn't strong or convincing enough; I thought his vocals were just a bit too quiet and unconvincing.  I'd say that the anthemic nature of the song also demands more confident stagecraft, which was lacking here. And sorry Tom, but that jacket was just too tight for you. 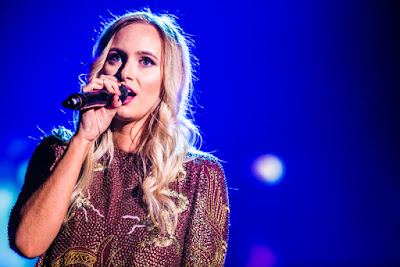 Probably my least favourite of the 5 final songs, if only because it lacked a real hook.  Astrid seems a good enough singer and deserved a better song.  Points also deducted for this one for the background 'contemporary dancing' which I absolutely detest.

Time for a random selection of some ESC nostalgia clips, including Belgium's 1980 entry "Euro-Vision" by Telex which is one of the greatest Eurovision entries EVER! 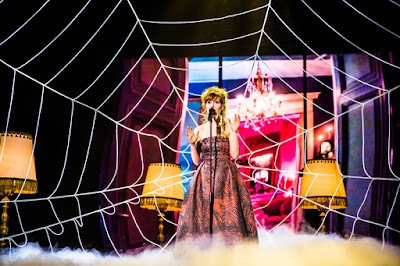 A.K.A. "Just how irritating can a chorus be?"  Although in its favour it did have a memorably irritating hookline, but the rest of it was disjointed and forgettable.  And I can't listen to this without remembering people on Twitter referring to it as "Kick The Rabbit"!  What it did have in its favour though, was pretty spectacular (by this programme's standards anyway) everything-but-the-kitchen sink staging, including flying lampshades and a giant spider web.  But all that just left me wondering "WTF??" and none of that could make this song any better.

On to the super final then with Laura v Tom battling it out in the televote.  After what seemed like an eternity, Laura was finally announced as the winner and she will represent Belgium in Stockholm.

"What's The Pressure" could best be summed up in a traffic report: "follow the Uptown Funk road and take the next exit at Sax".  For that's the problem with this song: it's just too derivative of the Mark Ronson and Fleur East hits - especially "Sax" - to work on its own merits.  However, as the weeks have gone on and week after week has brought crushing disappointment as I struggle to find any songs which appeal to me in the various heats, semi-finals and national finals of recent weeks, "What's The Pressure" suddenly doesn't sound so bad after all.  And little did I know when this song was selected all those weeks ago, that it would mark the beginning of a very derivative national finals season indeed.  I'm particularly looking at you, Melodifestivalen...

(pictures above courtesy of www.een.be)

Posted by Laura (EuropeCrazy) at 17:11 No comments: