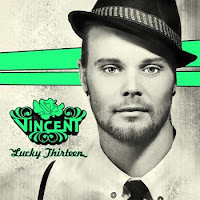 Vincent Pontare is one of Sweden's brightest new singer/songwriter/producers. He released his debut album towards the end of 2007 and I now have my very own copy which dropped through my mailbox a couple of weeks ago.

The CD features his singles "P.A.R.A.D.I.S.E.", "Don't Hate On Me" and "Miss Blue" which I would have to say are the best tracks on the album. Nevertheless "Lucky Thirteen" is a very good collection of songs for a debut, and already Vincent has created his own recognisable musical formula - pop with reggae influences. If I had any criticism I'd say that there could have been more diversity but there are a couple of tracks which are musically different - "How To Rob A Bank" which also has some interesting storytelling lyrics - and the acoustic styled "I Was Young". I like his voice which also suits his musical style very well. (His vocal style is certainly very different from his dad, gruff old Roger Pontare!!)

Despite its title, "Farewell" is the first track on the album (don't count the bizarre "Intro"!) and is a catchy, brassy reggae-type number and grows on you with every listen. "Cool Me Off" is musically a less frantic twin of "Miss Blue" whilst I could see "Tell Me" as a possible future single choice, it's a laid-back r'n'b style number with rapped verses. "Walking Crooked In A Straight Line" is another particular favourite of mine and I've been listening to this track quite a lot.
I think he has a very bright future ahead of him both as an artist and also as a songwriter for other artists (Vincent wrote Amanda Jenssen's excellent "Do You Love Me" and Danny and Therese's "If Only You", to name two recent Swedish hits).
All in all if you are a fan of good quality (Swedish) pop then I would recommend this album.
Posted by Laura (EuropeCrazy) at 15:36

Ooo, well, you know I've been looking forward to this review! And that sounds great--I'll have to pick the album up then. Thanks!

Happy birthday to your traveling companion, too!