It was a longer day today in Split so there was less of a rush to disembark today, which meant a more relaxing breakfast in Sirens restaurant.  Sirens is a self-service buffet restaurant at the opposite end of the ship from the Lido.  Both serve very similar selections of food although Sirens isn't open in the evening. 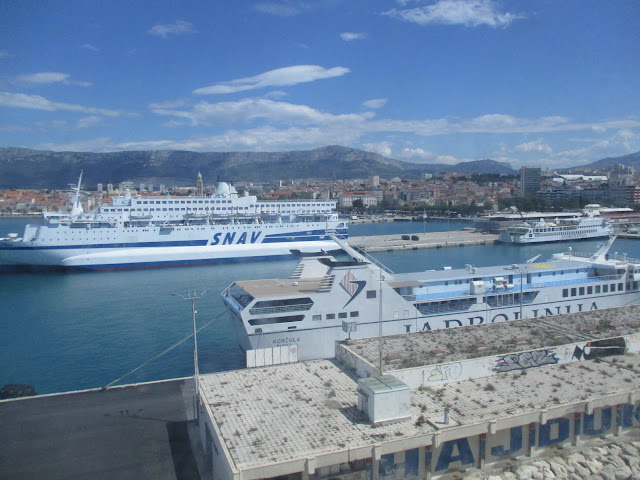 Split has a vast terminal with space for cruise ships and the many Jadrolinija ferries which serve this nation of over a thousand islands.  The Thomson Dream was docked a bit further back than we hoped/expected so it was quite a long walk to the city's photogenic promenade, the Riva. 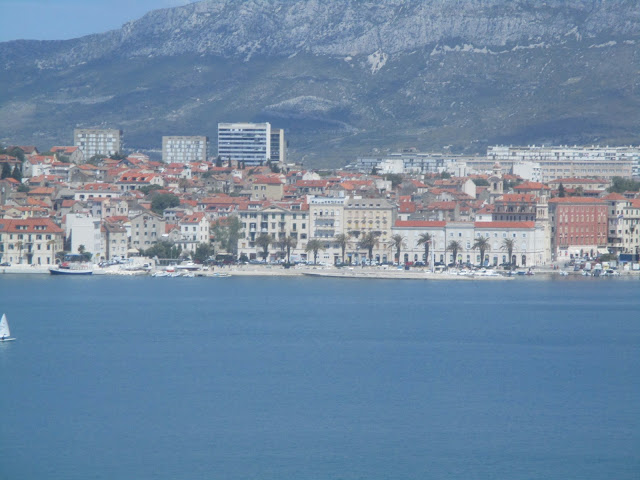 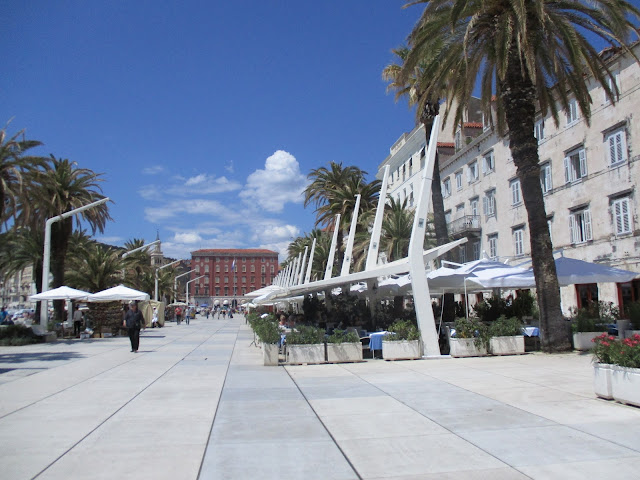 It wasn't our first time in Split of course - on our holiday in Trogir, 3 years ago, we took a day trip to Split so were already familiar with the city.  It's nice to see new places, but it's nice ro revisit old ones too. Coffee time on the Riva!  And we certainly needed some refreshment. The weather was much hotter here today than it had been so far.  Definitely around 28 degrees rather than the 25 of yesterday. After our coffee stop, we head along the Riva in search of some parts of town which we missed last time, such as Trg Republike (Republic Square) pictured below. 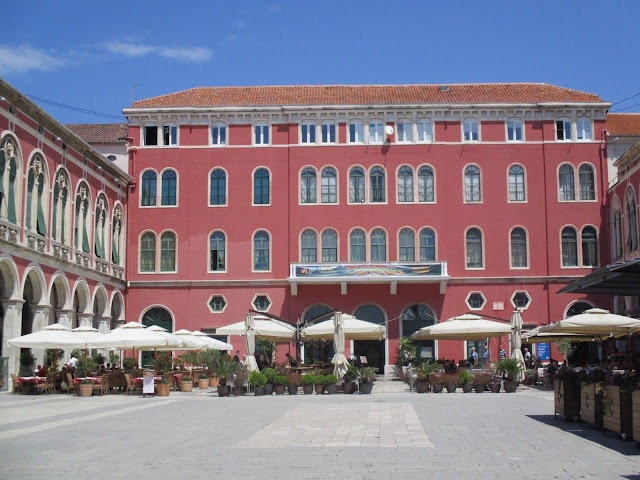 It wasn't too far from Narodni Trg, home of the Croatia Records shop.  My wish list this time included the latest CMC Vodice festival compilation and the Regina greatest hits CD. The woman working in the shop was quite impressed that I had heard of this band from Sarajevo, but I explained that they came to my attention through the Eurovision Song Contest.  It's only all these years later that I got round to buying their greatest hits CD!

We ended up almost at the same place for lunch as we did 3 years ago - I guess the hot young meet-and-greet guy with the designer stubble swung it for me :) 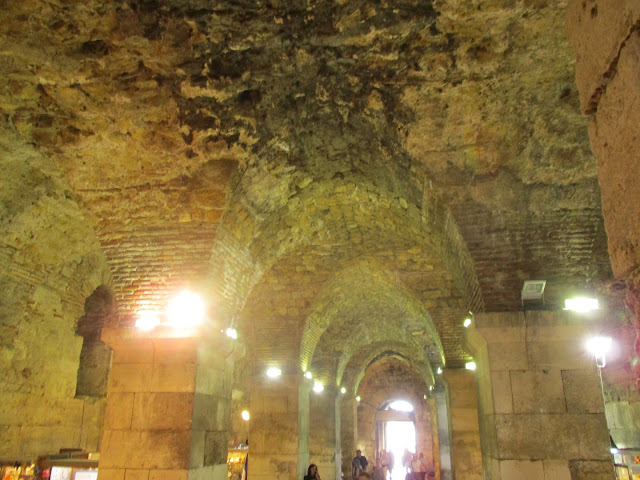 After lunch, we explored in and out of the maze of streets in the old town.  On our last trip we hadn't visited the basement of the Diocletian's Palace so that was on the to-do list.  It's packed with stalls selling art, souvenirs and jewellery. Back upstairs in the main section of the Diocletian's Palace and we were quickly reminded that Split is a top tourist destination.  Selfie stick army on the march!! We stopped to watch some klapa singing - well, you can't be in Croatia without a bit of klapa?  It just sums up the country so much for me. 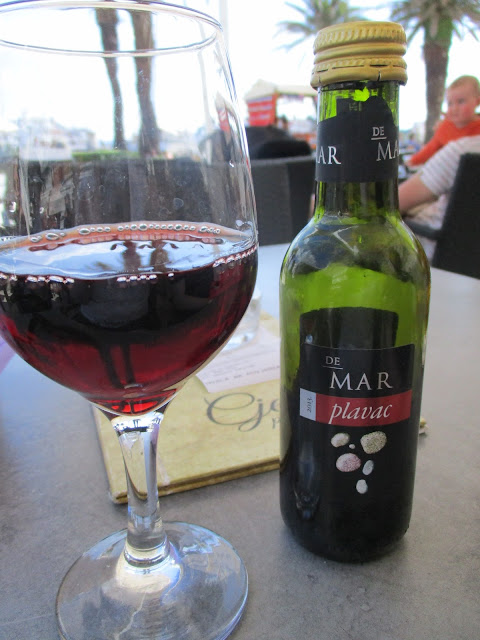 After a bit more exploring, it was time for what was becoming a tradition on this holiday - the late afternoon drink stop.  Back to the Riva for an Ozujsko beer for faithful travelling companion and a Plavac wine for me. And of course some free wi-fi too, therefore an opportunity to get some more post-Eurovision gossip on my tablet. Then it was time for some more sightseeing, including our first trip to Split's open-air market which is just outside the walls of the Diocletian's Palace.  No matter where you go in this city, you are surrounded by spectacular reminders of history.

Eventually we ran out of steam.  The heat got the better of us (mostly me) and we decided to slowly make our way back to the ship. 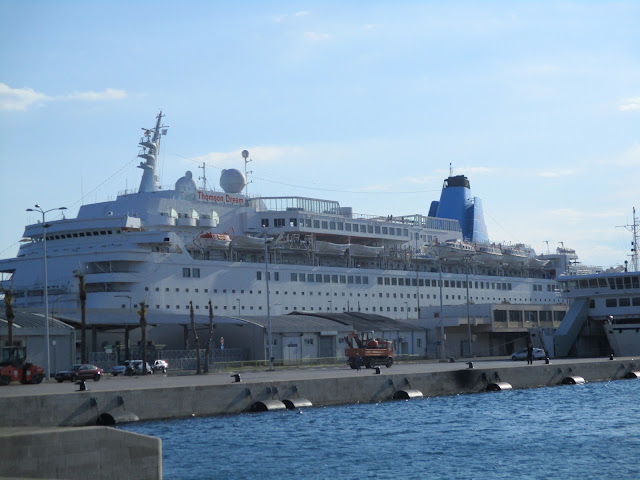 Towel animals are a great tradition on cruise ships.  We only had one special guest in our cabin on this holiday - say hello to our little turtle friend! 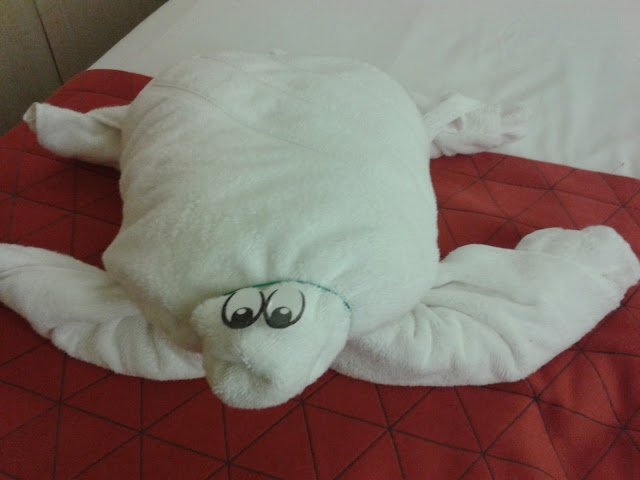 Due to our long day this meant a late dinner so we just grabbed a quick buffet in the Lido before heading to the Broadway Show Lounge for tonight's "Concerto Goes Pop" show, which gave the show team the opportunity to dress up in their finest suits and gowns. A bit like formal night on the ship!! Once again a top quality performance from the show team, well done all of you.