After yesterday's "Full Monty" on Lokrum, today it's time for the "Full Monte".

Another day and another new country for us.  That's still the best thing about a cruise - it enables you to discover so many different places over the course of a week.

We had docked early in Kotor, Montenegro, and I was up on deck to explore.  So we'd had the company of the MS Westerdam in Dubrovnik and it was with us again in Kotor.  However, the Thomson Dream got the best option - a port berth, whereas the Westerdam was anchored out at sea with only tender boats for transport.

I had done some research before the holiday to see which ships were in port on various days with the Dream.  As it turned out, the Westerdam was on a specialist music cruise, "Dave Koz and Friends". One of his friends happened to be one of my all-time musical heroes, the brilliant Sheila E. Unfortunately I never saw Sheila on my travels in Kotor, but even if I did I would probably have been far too starstruck and nervous to approach her anyway.  Long may you live "the glamorous life" Sheila! 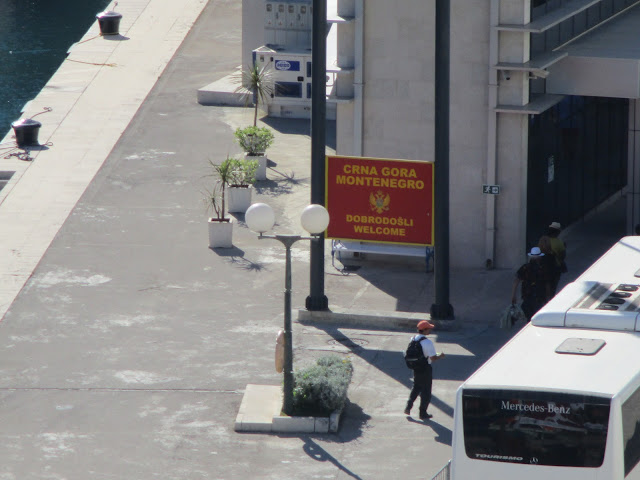 On arrival in Crna Gora I was really excited at adding another new country to our travel CV. However upon disembarking we were immediately reminded of another country which we had visited a few times in the past.  The hard-sell recalled Turkey, as taxi drivers and bus tour operators thronged round the disembarking cruise shippers, and we had to run the gauntlet on towards the gate and into the old town.

I can't mention Montenegro at this point without referencing my undying love for its Eurovision entrant from 2017, Slavko Kalezic, complete with swinging plait and single entendres-a-plenty. (Slavko has entered the UK X Factor so let's all get ready for his role as the "funny foreigner"/new Wagner - I swore I'd never watch X Factor again but Slavko might just be a deal-breaker).

Anyway what I'm trying to say here is that on a completely shallow note, in the interests of research, I wanted to check out the local male population and I am happy to conclude that they were rather easy on the eye (honourable mention for the dark-haired guy in full business suit, standing at the old town gate).  In the interests of equality it would be fair to say that faithful travelling companion was equally impressed with the female population of the town, many of whom worked in souvenir shops and who were either called Dragana or Ivana :) 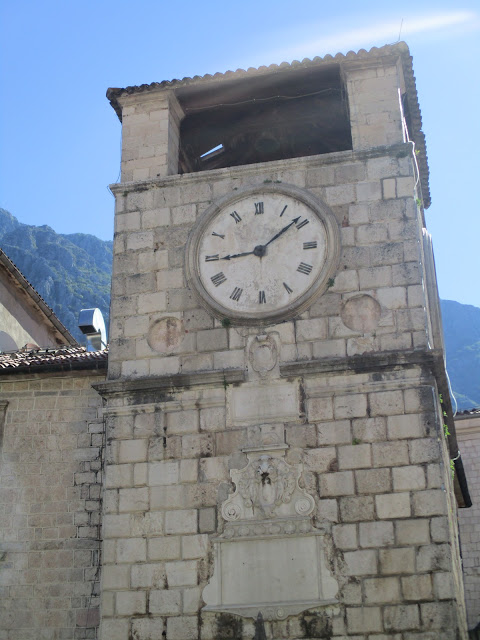 Kotor is basically an old town, dripping with history, and has a lot of authenticity.  Although the town's businesses definitely set out to benefit from the cruise ship traffic (the hard sell in the shops and the rather unnerving experience of being followed around a souvenir shop by said staff member), it's done in a different way from Dubrovnik.  They even put on a music and dance folklore display for the tourists in the town square. 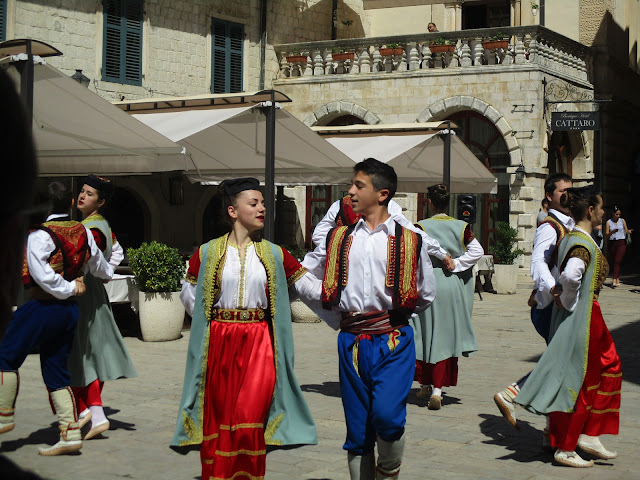 Kotor was deceptive.   After our mid-morning coffee on the square, we did some sightseeing and quickly found ourselves back at the town wall. However on re-entry Kotor turneed out to be a much bigger small-town than first thought, to the point that we inevitably got lost at one point.  Happily our direction finding is rediscovered and we certainly covered every corner of this fascinating old town during our visit. 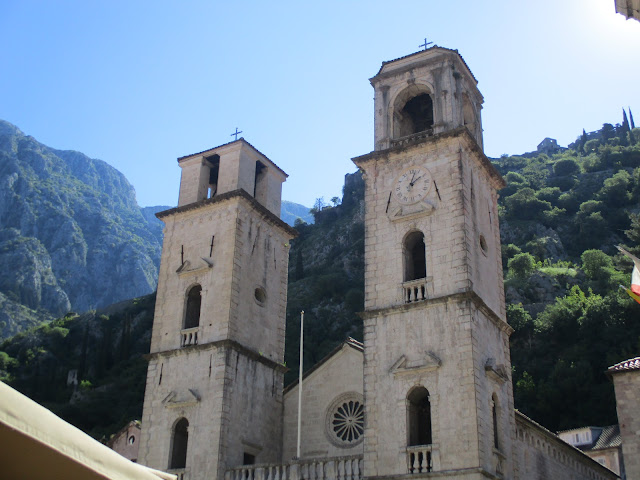 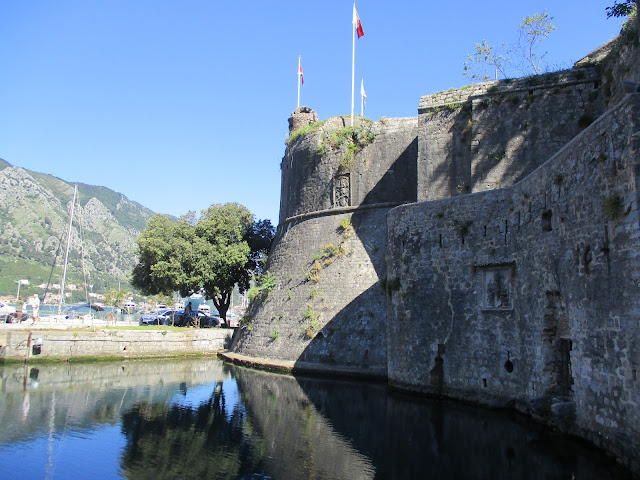 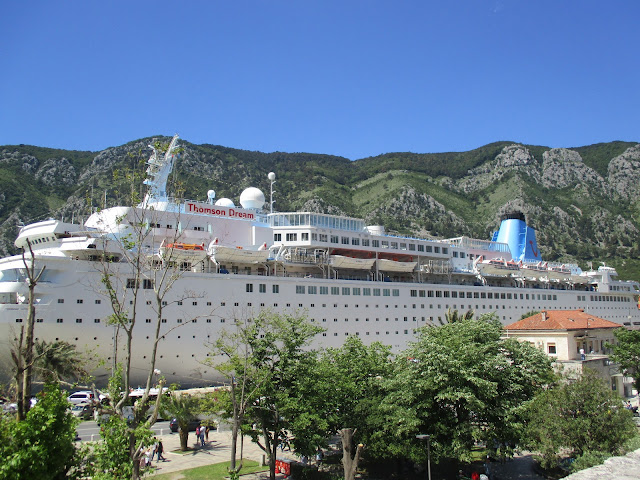 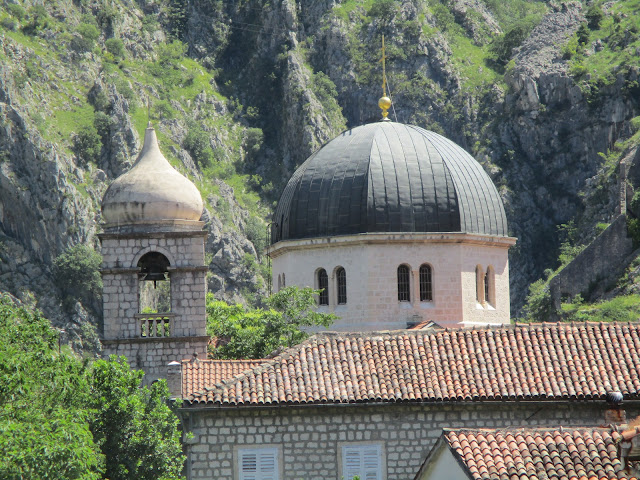 Kotor also has a selling point for everyone who is a fan of one particular type of domestic pet.  The town's former name was Cattaro - can you guess what it is yet?? 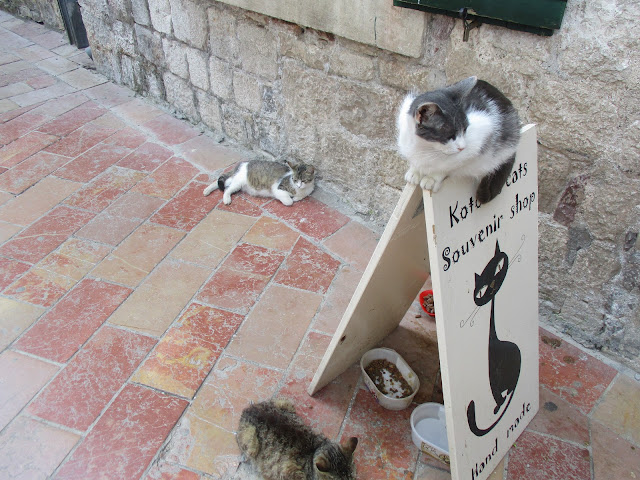 Every shop seems to have some kind of cat-themed souvenir so is an ideal place if you are a cat lover.  They are definitely the symbol of this fascinating little town although dominate to the extent that you often can't get a seat in an outdoor cafe for a little feline specimen or two, sprawling across the only available seats left.  Basically cats rule in Kotor, and everyone else can just go home.

We have lunch accompanied by Montenegrin beer. 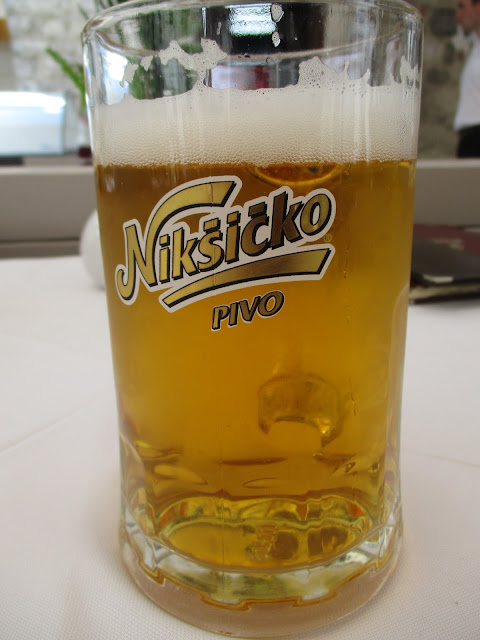 I don't look for much, but all I wanted was a photo of a sign in old Cyrillic.  *Check*. 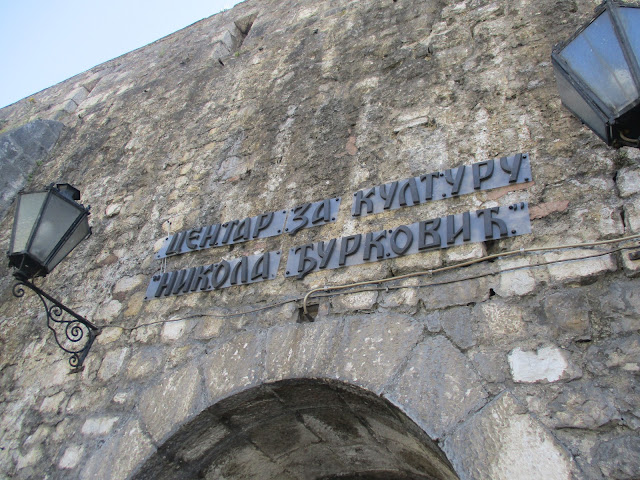 After some more post-lunch exploring, it was eventually time to head back to the Dream.  For a holiday with so many wow moments, appropriately our final day and final sail-out would probably provide the perfect conclusion.

But first, a moment of sympathy for the passengers on the Westerdam, having to queue in a long long queue for a long long time to board the small tender boats taking them out to their ship. 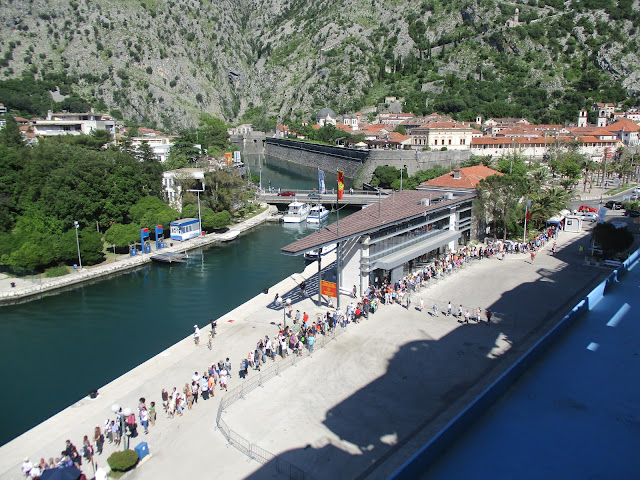 Then the sail-out began through the stunning Montenegrin fjords. 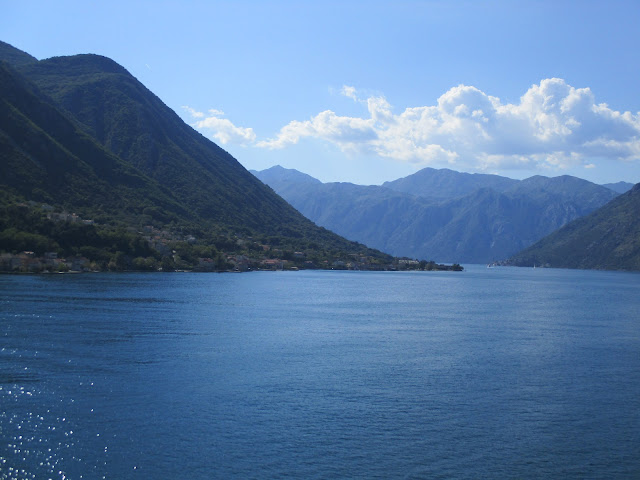 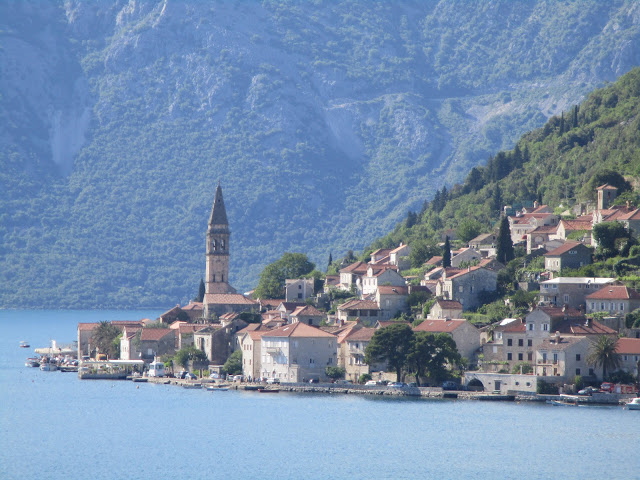 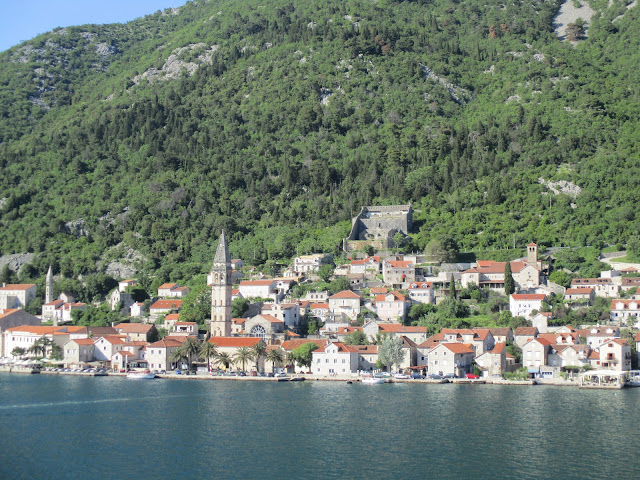 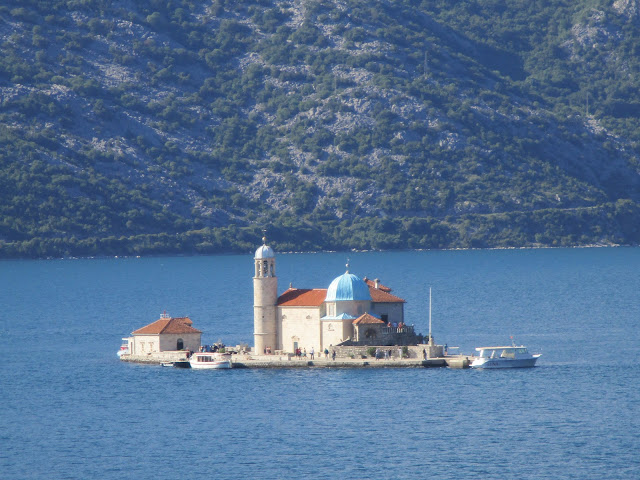 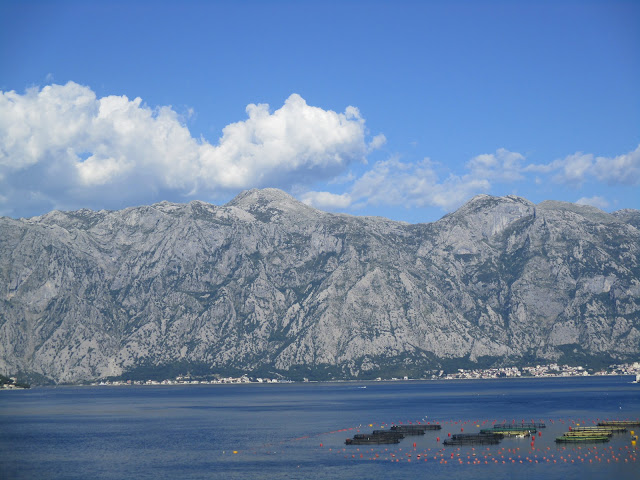 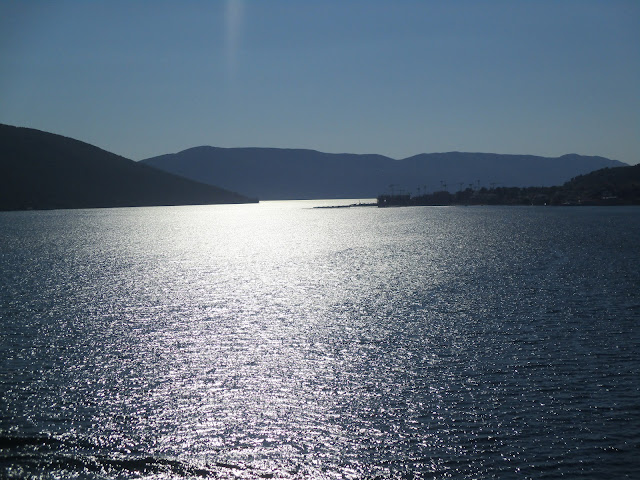 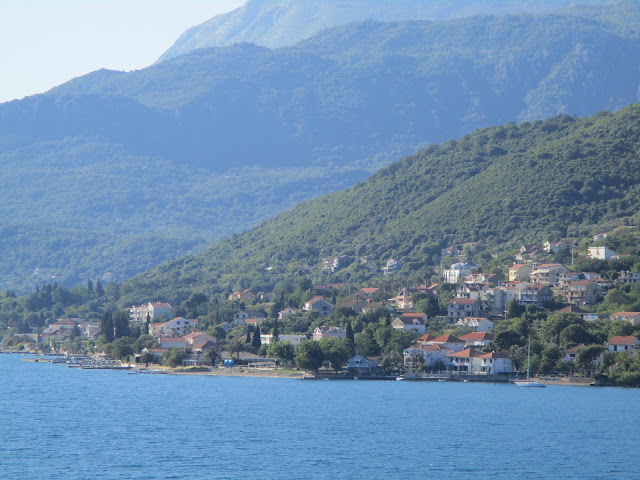 We stayed on deck for almost two hours - yes, two hours of those views! - but it was time to go back to the cabin and do our packing before our final evening meal of the holiday.  On cruise holidays there is a rule that you have to leave your case outside your cabin on the last night before disembarkation.  There is a simple but successful system of colour-coded luggage labels depending on your flight destination which ensures that your luggage will be in the right place when you disembark.

One last meal in the Orion... 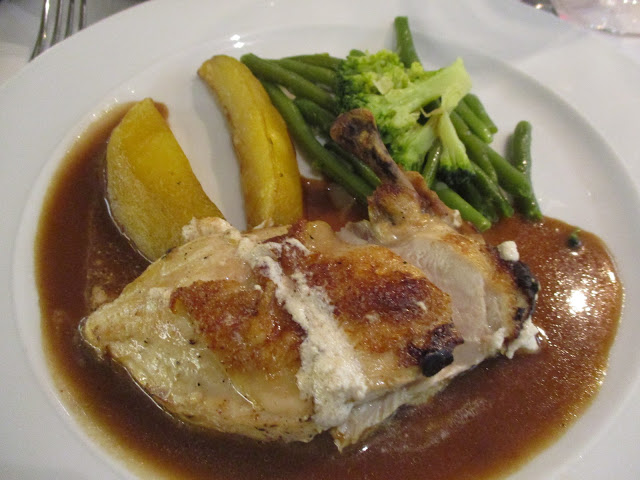 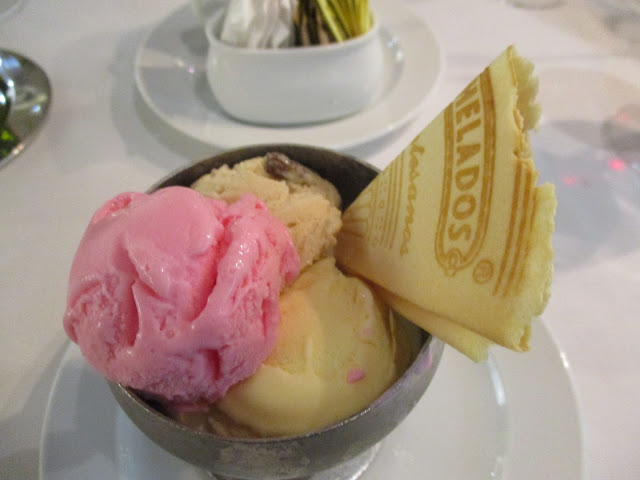 For old times' sake we end our evening in the Coffee Port (which turns into a piano bar/lounge at night) with our old favourites, Singapore Slings (below), to the soundtrack of probably the cheeriest version of "I Dreamed A Dream" which I've ever heard.  The singer obviously didn't get the memo about just how depressing that song is....! 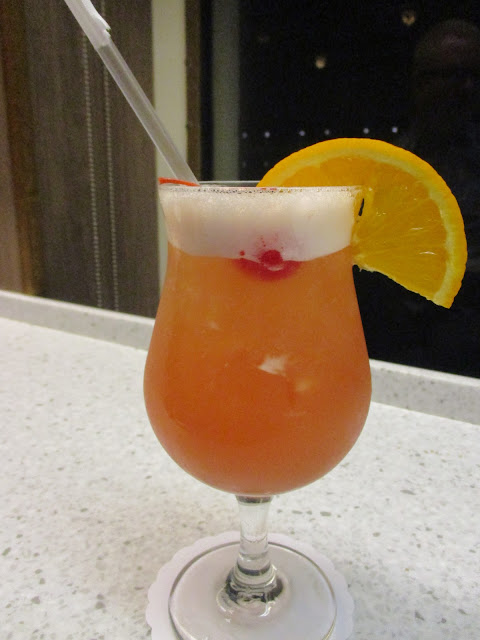 It's an early night for us though as it's a very early rise tomorrow in Corfu :(
Posted by Laura (EuropeCrazy) at 20:29